This year, luxury trendsetter KaDeWe is once again the place to be for Samsung.

Cheil Germany led the creative phase and supplied the concept for “Innovating Evolution” – a fictitious representation of an unusual journey through time. The focus was deliberately placed on one location, which was then expanded as a strategic communication platform for the three most important target groups – press, VIP and consumers.

Cheil’s virtual campaign idea was implemented in close cooperation with P.O.S., giving way to an authentic and extremely precise realization of the design and a scenic staging of KaDeWe’s display windows, atrium and the 7th floor. Working together with Cheil, our expertise was applied to areas ranging from conceptual and implementation planning, production and construction processes to the coordination of live performances.

The result was an exclusive exhibition featuring a stylishly dressed Neanderthal as communications ambassador for the presentation of 4.6 billion years of prehistory. The elaborately designed multimedia installations and exhibits presenting futuristic folklore generated pure fascination for days on end among the visitors to KaDeWe, and creating a considerable splash on the social web and in countless television and press reports.

“The result was an exclusive exhibition”

10 moments of evolution – The display windows
Incorporating interactive presentation tools to breath life into Cheil’s ambitious approach and vision, P.O.S. designed 10 display windows to show the history of mankind spanning from prehistory to modern technology. With perfection and intensive identification at all project levels, we were able to bring monumental fantastic scenes to life.

Shaped out of stone and water – The atrium
The “history” was presented – to the amazement of all who saw it – in the middle of the atrium. Visitors became part of another fantastic story and found themselves immersed in the origins of life – the underwater world. As part of a kinetic manta sculpture, schools of fish passed over the heads of awestruck visitors. All of this was brought to life on 144 Samsung Galaxy tablets.

Joining the Neanderthal on the hunt and at the campfire – The 7th floor
The slogan of the campaign found its culminating expression in a VIP dinner.
The encounter with the Neanderthal in the underwater world of the atrium was the starting point for a shared primeval journey to the 7th floor. The narrative here: archaic meets ultra-modern, rough meets refined, nature meets technology.
In a lavishly landscaped natural setting, VIPs were transported into a living jungle environment and entertained by wild warriors, drummers and dancing Amazons by the campfire. On the menu was Paleo food – masterfully presented and executed by Michelin star chefs Frank Buchholz and Andi Schweiger. 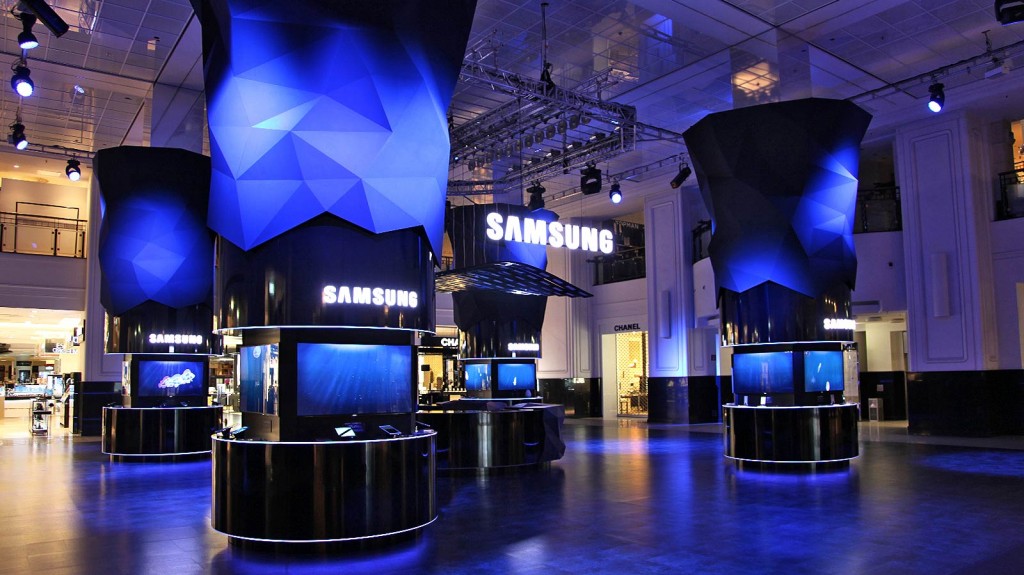 Christian OttoSamsung – KaDeWe Atrium and Window Design, Inner Circle Gala Dinner10.27.2015
To improve the use of our website, we use cookies and Google Analytics. Your consent is voluntary and can be revoked at any time! Further information can be found in our privacy policy.OkayNein